Google, the largest corporate purchaser of renewable energy in the world, announced today that it will be powered 100 percent by renewable energy by the end of 2017, closing the book on a series of commitments first made in 2007 to transform how the company approaches sustainable business.

Nearly ten years ago, Google made a commitment to go carbon neutral by the end of 2007. This kicked off a broader sustainability effort within one of the biggest companies in the world that resulted in commitments to purchase over 2.5 gigawatts (GW) of renewable energy and, separately, to invest nearly $2.5 billion in clean energy projects globally.

“The science tells us that tackling climate change is an urgent global priority,” said Urs Hölzle, senior vice president for technical infrastructure at Google. “We believe the private sector, in partnership with policy leaders, must take bold steps and that we can do so in a way that leads to growth and opportunity.”

Now, with a new white paper detailing how Google got to 100 percent, the lessons learned, and what’s next, the company is both finishing what it started and setting itself up for the next phase of sustainable business. And it is not alone—as Google celebrates success on its direct contracting strategy, the corporate renewable energy movement encompassed by RMI’s Business Renewables Center (BRC) is growing stronger by the day.

EVERY TIME YOU CLICK—THE PATH TO 100 PERCENT

Thanks to today’s announcement, every time you click on a Google product in 2018 and beyond, you’ll be taking advantage of clean, renewable energy. For many people, renewables have traditionally been more of a science project than a business strategy. But Google’s path to becoming the first fully renewable company on the Fortune 100 demonstrates a willingness to adopt innovative ideas. Like other BRC members and other peers, more than 83 companies are now adopting this strategy. Here are several of the steps Google took in order to achieve 100 percent renewable energy: 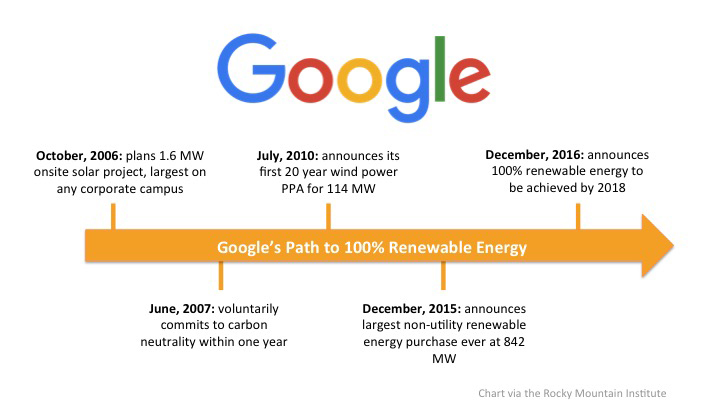 Some of Google’s earliest investments into renewable energy came during the mid-2000s and were not the off-site, long-term power purchase agreements (PPAs) we see corporates signing today. In 2006, Google planned an on-site, 1.6 MW installation at its Mountain View, California campus. At the time, the project was the largest solar installation on any corporate campus in the U.S. and offset approximately 30 percent of peak electricity consumption for the main Mountain View buildings. On-site renewable energy solutions are still popular for many business models—retail, for example, can often take advantage of significant rooftop space. But off-site procurementis an increasingly preferred model for companies seeking to buy renewables at scale, as Google soon discovered.

To procure renewables in sufficient quantity to offset more than just a few megawatts (MW) of power, most companies need to go beyond on-site generation. In 2010, Google did just that, entering into its first PPA contract for 114 MW of wind power at the NextEra Energy Resources Story County II facility in Iowa. The off-site PPA contract has since become the vehicle of choice for companies buying renewable energy, and the BRC’s current membership accounts for over 93 percent of all corporate PPAs signed since the BRC’s formation. The advantages of a corporate off-site PPA are numerous and include the ability to keep the transaction off-balance sheet, select projects with advantageous environmental benefits, and hedge existing price risk. And Google notes that, “Having no fuel input for most renewables allows us to eliminate our exposure to fuel-price volatility and to smooth our financial planning over the long term.”

For Google, that first PPA in 2010 set off a wave of deals over the next five years as the company contracted for approximately 1,200 MW of renewables between 2010 and late 2015. The economics of renewables were working for many companies, and 2015 proved to be the Year of the Corporate PPA with 3.24 GW of power contracted by players like Philips, Owens Corning, Dow Chemical, Apple, Amazon, and many more. Today, the BRC has nearly 170 members and continues to recruit members interested in creating or advancing a clean energy strategy to complement their existing energy portfolio or sustainability initiatives, or simply to save money. And today, the rise of the “virtual PPA” is enabling companies to scale their renewable energy investments more easily than ever.

WHO WILL STEP UP NEXT?

While Google has certainly earned its reputation as the “godfather of corporate procurement,” fellow early leaders in high tech, such as Facebook, Microsoft, and Apple, are combining to inspire additional players from the retail, automotive, and heavy industrial sectors to join the market for clean energy.

“Considering this announcement by Google in the wake of the BRC’s most recent gathering in Detroit this past November, I’m struck by the impressive progress the corporate sector is making in achieving its sustainability and energy goals,” said Lily Donge, principal at Rocky Mountain Institute and the BRC. “Now, we’re eagerly watching to see who among the Fortune 500 will step up to match Google’s achievement,” she said. “There are some strong contenders out there, including Amazon, Walmart, Microsoft, and others. 2017 will be a pivotal year for buyers looking to take on a leadership role in the energy space.”

And several players are already jockeying for position. Amazon is a strong contender—much like Google, it has a significant load factor due to the nature of the data center business. In 2015 and 2016 alone, Amazon contracted for 538 MW and 597 MW, respectively, making good progress toward a new goal to be powered by 50 percent renewable energy by the end of 2017.

A last-minute burst of deals at the end of 2016 has added to the excitement in the corporate market. Within just the last few months, numerous BRC members, including Amazon, General Motors, Avery Dennison, and Microsoft, have all announced projects adding a mix of wind and solar to the grid.

NOW’S THE TIME TO INNOVATE

Google and other high-tech companies are defining the energy transformation and now all of corporate America has the chance to join them. Record-low costs, flexible, innovative contracts, and a wealth of market knowledge make going renewable easier than ever. Pretty soon “every time you click” will become “every time you buy,” “every time you manufacture,” and “every time you…” well, pretty much anything.

This blog post originally appeared on the Rocky Mountain Institute Outlet, a blog that explores topics critical to RMI’s mission to drive the efficient and restorative use of resources.